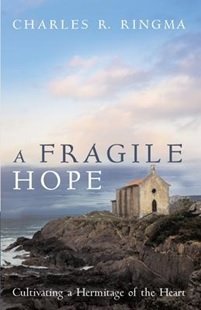 Charles Ringma comes as no stranger to the bookshelves of many Christians in Australia and to many in the international community. Whereas most theologians have developed one major field of enquiry Ringma has scanned, explored and developed an extensive range of theological pursuits and avenues of interest. Often these aspects have been expressed through a large range of penned semi-devotional works, amongst them Bonhoeffer, Mother Teresa, Ellul, Nouwen, Martin Luther King and Merton, as well as scholarly works which include a Commentary on Judges and Hearing the Ancient Wisdom.

To that are added a number of pastorally-related books, such as the Art of Healing Prayer and a number of books on poetry, while he is also the editor of many a collection of Christian-focused articles emanating out of Asia and Australia. His latest book, A Fragile Hope: Cultivating a Hermitage of the Heart, brings the total to twenty-seven publications. His extensive repertoire makes his latest book so interesting.

It is rare for theologians to write in the first person for good and not so good reasons. Generally, that has been a process adopted by Charles. He has the ability to skilfully abstract himself from the subject of his engagement. Self-disclosure is only rarely seen at the margins, if at all, in his previous works. Yet, his latest book is substantively different.


A Fragile Hope takes us on his personal journey of reflection and review following a 6-month sabbatical in a Hermitage. It is a very unusual book that highlights the big theological and social questions of the day though in a very tight and concise format. In particular, these are issues that relate to his life journey and, more specifically, to his struggles and engagement with the dilemmas of the contemporary socio-political-economic and religious western world of a Christian who desires to walk in the footsteps of Christ while maintaining faithfulness to the scriptures. It deals also with the big deep questions of how he must live and the tensions and paradoxes that are disturbing to him. This book is different in that it is about Charles Ringma and his journey though it also echoes the journey of others who have walked that path. He seems to draw from many of the saints of old. It is he who bears his mind, his heart and his soul. But don’t be fooled, this is not a narcissistic exercise in navel gazing; it is a time of listening at the altar of the authors’ confessionals. Charles is a wordsmith who skilfully and subtly takes us on his journey as we are perhaps faced with the same tensions and dichotomies of daily living in the Kingdom of God, especially in a western context. It is insightful, inspirational, challenging and, sometimes, disturbing.

The take-home message that I have personally drawn from this is of an increased hope – a greater and deeper hope to see and live in the Kingdom of God in my daily life, to be in the world but not of it nor conformed to it. To live in the transformational zone. I think a slow daily and deeply reflective reading of the book will assist that process for me, and I think for many of the readers.

I commend this book as not one to simply fill a space on the bookshelf but one to assist reflection and review of the pilgrimage journey for the thinking Christian. It is a very practical and insightful book which is relatively free of theological jargon and it would be an ideal read for individuals seeking a deeper more meaningful Christian faith experience. It is an accessible companion of about one hundred pages and it is broken into twenty-eight chapters, each loaded with nourishment and wisdom. It is incredible value at $25.

Greg Sheridan, Christians: The urgent case for Jesus in our world,
Allen and Unwin, 2021.
From $26. Paperback.
Reviewed by Ted Witham tssf

Greg Sheridan introduces his new book on the people of Christianity with his cheerful description of our faith:

‘On the inside, Christianity is full of feast days and family, full of fellowship, full of friendship. And everyone is welcome, surely never more so than at Christmas. It’s full of care for the sick and elderly, and for infants. It’s full of sport and play, hard work and rest. It’s full of good music and laughter, happy rituals and lots and lots of food (it’s very big on food). It is the principle of human solidarity. It’s the search for decency. It’s a conversation with each other and with God. As John Denver might have put it, in Christianity you routinely speak to God and rejoice at the casual reply.’ (Page 11)

Christians is Greg Sheridan’s second book in defence of Christianity. Sheridan writes of a large Christianity, catholic in the widest way. One of his principal arguments, first advanced in his 2018 God is Good for You, is that it is more reasonable to believe in God than not. The first book was mainly a rejoinder to the new atheists. In it, he took on writers like Richard Dawkins and Christopher Hitchens and showed how much bigger Christianity is than the caricature Dawkins and Hitchens attack.

In this second book, Sheridan tells stories: the stories of Jesus, Mary and the remarkable Paul. Stories of the faith of Scott Morrison, Alpha’s Nicky Gumbel and the Melbourne Anglican founder of Converge, Jenny George. He tells the story of China’s Christians, and the difference they may make to the future of China. In London, he compares the neighbouring churches of Holy Trinity Brompton (HTB) and the Brompton Oratory, where traditional and informal liturgies, high classical church music and Matt Redman’s Gospel songs are all quite different and all nourish believers.

Christians compresses Christianity to its simple heart. For a reader like me, Sheridan sometimes makes Christianity seem too simple. But his purpose is to provide an attractive portrayal of Christianity for those who do not share the faith. In that, Christians reminds me of C.S. Lewis’ Mere Christianity, and Christians is a more entertaining read than Lewis.

Greg Sheridan’ s writing is compelling and accessible. He works as foreign editor for the Australian newspaper. In Christians, he is open about his political stance (he describes himself as centre-right). In a throwaway line, he suggests that Christians are likely to be centre-right or centre-left in their politics. Extremes are likely to lack love.

Christians is endorsed by well-known journalists and by church leaders as diverse as Russell Evans from Planetshakers International, Peter Comensoli, Catholic Archbishop of Melbourne and Pastor Samuel Rodriguez, President of the US National Hispanic Christian Leadership Conference.

It is a book that can be shared both with non-Christians and Christians alike. Those unfamiliar with our faith will find an attractive picture of how Christian faith is lived, and Christians will be encouraged that such a positive book will speak to such a challenging time.

Part of us wants to pretend the Coronavirus pandemic has not happened, and that the Church can go back to its old ways after the worst of this is over. I have no doubt, however, that there will be enduring changes, not least in the way Church organisations use technology.

The collective of Christian writers behind To Whom Shall We Go, who call themselves the “Holy Scribblers”, are also convinced of permanent change. Their interest, as shown in this series of eleven essays, is in changes to our spiritual lives more than technology.

The book is loosely structured around the Beatitudes and this structure gives the book an optimistic feel: we Christians will be stronger and our faith will be deeper – we will be more blessed – because of living through this moment. Their grounds for optimism are historical. We have before lived through past pandemics and challenges and emerged changed and stronger.

The authors are an eclectic mix of academics and thinkers who are looking for thoughtful Christian readers, clergy and lay. Two Franciscan Tertiaries, Terry Gatfield and Charles Ringma, are among the contributors. As is always the case with essays from diverse authors, individual readers will find some essays stronger than others. For example, Chris Mercer’s explorations of Desert Father Evagrius’ “eight deadly thoughts” (gluttony and lack of thankfulness for food, sexual lust, sadness, boredom and apathy, vainglory and pride) resonate for me.

I have some quibbles with the structure of the book. Each section gave rise to prayers and questions for reflection. The reflection questions were at the very end of the book. In the eBook format, especially without hyperlinks, this rendered the questions almost useless.

The prayers were crafted along quite traditional lines, so some could be used or adapted, for example, for intercessions at the Eucharist. I found them a bit too stolid, with none of the creativity of the stunningly beautiful prayers of another Australian, Craig Mitchell, in his recent Deeper Water (Mediacom).

To Whom Shall We Go is a timely book and will stimulate lively thinking about where God is now leading God’s Church.